Information and Places for Chimpanzee Tracking in Uganda.

Queen Elizabeth National Park is one of the most fantastic parks in Uganda for Wildlife and Birding, it also a prime place for chimpanzee tracking (trekking) at Kyambura Gorge where you will find Chimpanzees in abundance.  The scenery in the gorge is breath taking and there are many mammals and birds to be sighted as you take a morning to discover the Chimpanzees of Kyambura Gorge.

Chimpanzee Tracking at Kyambura Gorge can easily be added to any Safari to Queen Elizabeth and gives you complete look at various aspects of the park. Since you are already at Queen Elizabeth there are no separate entrance fees, just the tracking fee itself making it also economical for visitors to Queen Elizabeth Park in Uganda.

The tracking increases your price of a Queen Elizabeth Safari slightly, but our clients feel it well worth the added cost, enhancing their overall Queen Elizabeth Park Safari experience. Explore the chimpanzees in Uganda here >>

Let us know if you would like to add Chimpanzee Tracking at Kyambura Gorge to your Queen Elizabeth Park Safari in Uganda.  We can easily adjust your safari to include a time with the Chimpanzees.

Kyambura Gorge - The Valley of Apes 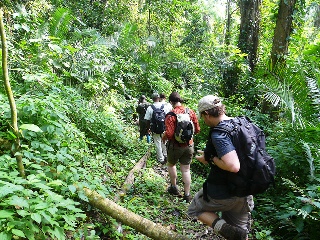 Kyambura Gorge is one Sunken Tropical Forest in the Western Rift Valley hidden, as most people during their time at Queen Elizabeth National Park bypass it and miss the scenic wonder here, unless they have chimpanzee tracking. And I am not sure how many tour operators in Uganda do include it in their itineraries for their visitors,...quite a few of them.

Kyambura Gorge, also known as Kyambura Game Reserve, is part of the Queen Elizabeth National Park (QENP) in Uganda. It is home to a variety of wildlife, including the only primates in the Queen Elizabeth National Park. The area is an important water source for many animals and is surrounded by savannah, but is generally noted for its high concentration of primate life located in the gorge.

Kyambura Game Reserve was formed to serve as a buffer zone to the Queen Elizabeth National Park. Dry seasons always left much of the park parched, but this beautiful gorge is the much needed 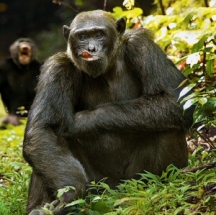 oasis for both animals seeking refreshment and for humans, seeking a sight for weary eyes. Water flows from rocks and keeps the gorge green on all time. Rocks that seem to be in various states of tumbling stand out.

For Chimpanzees specifically, its a real-life drama. - a family of chimps trapped in this lost world. – they live in a deep and ancient forested gorge that runs though the African savannah and for over fifteen years it has been cut off from the rest of the jungle, leaving them imprisoned. The chimps here face a daily life-or-death dilemma: whether to leave the safety of the gorge and venture into the predator-ridden savannah to find food, or face hunger. There's now less than thirty of them left.

A few visitors who tend to have chimpanzee tracking on their safari itinerary and then get the chance to visit Kyambura Gorge, simply get amazed as to what they find here. Tracking/trekking the chimps in the Gorge is more physically challenging and therefore is suitable only for reasonably fit people. But it is a real rewarding rainforest experience, and the place is just fantastic. 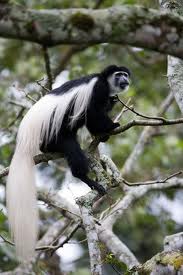 Kyambura is located on North-Eastern side of QENP, approximately 30 km from QENP Headquarters. Kyambura Gorge spans a distance of 16km south of Lake George and links to the Kazinga Channel, which forms the northern boundary of the reserve. Village and plantations lie to the south. The reserve's mean altitude is 1100 m.a.s.l. The total area of the reserve is 156 sq. Km. The Visitors’ center is located at the famous Fig Tree Camp on the rim of the Kyambura Gorge, about 2.5 km east of the main road along the turn-off that is clearly marked, some 9km south of the bridge, this road isn’t in great condition but that’s not an issue when you have a 4WD, - getting to QENP as well as this place ideally you need your own vehicle.

The gorge has the most incredible views in Uganda, there is also great viewpoint platform from which you can take some great pictures of the Kyambura Gorge surrounded by the Savannah and a rich tropical Forest below.

Kyambura is the only place in QENP where you can see habituated Chimpanzees and other primates (about 12) including red-tailed monkey, Black-and-White Colobus, Baboons, Vervet monkeys, Giant Forest Hogs and other mammals. The park is also known for its variety of avian/bird species including various Falcons, the Blue-headed bee-Eater and the African Finfoot and so much more ... it a birders Paradise, not forgetting plenty of Butterflies. 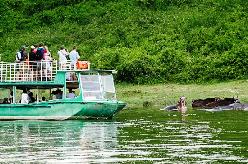 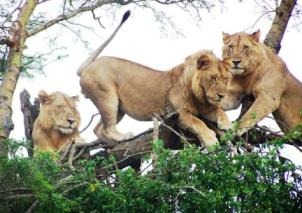 3 day Ishasha Plains Tree Climbing Lions Safari: One of the must do while in Uganda.
Current Car hire / rental discount price list for Uganda
Self drive; Is there such a thing in Kampala - Uganda??
Entebbe airport Transfers: Regular & Free / promotional airport transfers
Paying for Fuel if hiring a Car & Driver in Uganda
Uganda Mini - Safaris: Short trips/tours you might consider (1, 2, 3 & 4 day safaris)
Long Uganda safaris: 5 days or more into top safari destinations
Gorilla Tracking (Trek) information safaris, Practical advice and tips
Paying options & advice for your Safari, Gorilla tracking (trekking) or Car Rental in Uganda
Africa (Uganda) Practical Travel Guide & Health Information: All health travel concerns addressed, before during & back home
Visit Africa's Red tapped Rhinos at Ziwa on the way up to Murchison Falls Park - from Kampala
Things to do and see in the Pearl of Africa-Uganda.
Visit the Mabamba Swamp - Home & best place to see the elusive Shoebill stork in Africa
Uganda Tourist Visa Information - Practical Advice where to get your visa, procedures, all in a timely manner as you arrive
Practical ways to help you save a $ on your trip to Africa - Uganda Safari
The Chimpanzees of Uganda and the best place to see chimps on safari
Best all around Wildlife Short Safari Experience in Uganda. A Murchison Falls Park Safari is the favorite of those who take a 3 day (short) Safari in Uganda
Getting aroung Kampala: Information, advice & tips
Camping & the things you need: Essential Items to Pack for Your Africa - Uganda Safari
Uganda Money Information; Forex, Credit Cards, Transfers & Travellers Cheques
Uganda Weather & Climate: - year around Holiday Weather - Is just another plus to visiting Uganda

If you have issues reaching us via the our business email address, here is the emergency contact; lifetimesafaris@gmail.com
By Jesse Tom Kitanywa
Top