Murchison Falls National Park in Uganda is the largest of National Parks, one can say literally, that a river runs through it and that river is the Nile River. The name "Murrchison" Falls was given to us by Sir Samuel White Baker, (June 8 1821 – December 30 1893) a British explorer, naturalist, big game hunter, engineer and also served as the Governor-General of the Equatorial Nile Basin (today's South Sudan and Northern Uganda) between Apr. 1869 - Aug. 1873. Baker named them after Sir Roderick Murchison, president of the Royal Geographical Society. The falls lend their name to the surrounding Murchison Falls National Park.

The Park was started under the colonial rule by the British in 1952. When Idi Amin (the former Ugandan dictator and self-styled "Conqueror of the British Empire") came along in the 1970s, he had a way of removing any British name reference and renamed the Falls "Kabarega", after the Omukama (King)Kabarega of Bunyoro. But this was never legally promulgated and the name reverted to Murchison Falls following his 1979 downfall.. 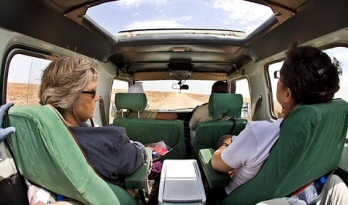 By road, the Nile river crossing at Paraa, in the centre of the park, is approximately 4½hrs drive from Kampala (305km). Paraa is 85km from Masindi town by the direct route. A longer (135km) alternative route passes through Budongo forest and enjoys spectacular views across Lake Albert from the rift valley escarpment above Butiaba. Paraa can also be approached from the north, via Chobe Gate near Karuma Falls and Tangi Gate near Pakwach (25km to Paraa), and Wankwar Gate near Purongo.A vehicle ferry crosses the Nile at Paraa. This operates hourly between 07.00 and 19.00 with the exception of 13.00. Murchison can also be reached by air. Charter flights can land at airstrips north of the Nile at Pakuba (19kms from Paraa) and south at Bugungu (13kms from Paraa).

Things to do and see at Murchison Falls National Park - Uganda 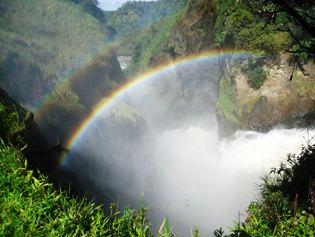 Murchison Falls - Top of the Falls Visit:
Murchison falls along river Nile is a true master piece of nature! In a small space a million cubic meters of water from the Nile squeeze themselves through the Albertine gorge as they make their way 6,853 km (4,258 miles) towards Egypt.

Many people wonder how the scenic falls would actually be, but once you are on top of them and see the entire Nile going through a small gap, it make sense why so many visitors make the trip. The Nile River is about 50 meters wide on top just before the falls, it drops down 43 meters through a 7 meter wide gorge. The journey to the park is a long one but once you reach this place, it becomes worth it. The thunderous spectacle and noise made by the water as it passes through the tiny hole is magnificent – one not to be missed by anyone with the means because no better words can explain the display.

A guide can walk you around, but most people choose to do it on their own.  There is a path down to the bottom of the river, but there is also another path that leads you upriver to another set up falls that comes before the Murchison Falls that most people see. That walk will take you about 20 to 30 minutes. If you walk to the last viewing point and look back at the falls, there is a a rainbow that does not disappear.

And you can find a cave in the wall where bats come out at nighttime and during the day time you can find various raptors and swallows. You might run into some baboons along your walk but that is about it. 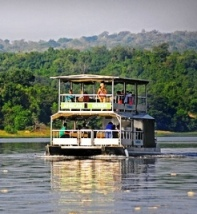 Nile Wildlife Boat Safari to the bottom of Murchison Falls:
Boat Safaris at Murchison Falls are one of the highlights of your safari here. This is a fantastic 3 hour boat ride, there are several boats used and the best one is the one with a top deck where you can stand and take pictures of the animals, the boat will slow down when the pilots sees some wildlife of interest on the banks. Wildlife in abundance along the shores of the River Nile. Then there is of course the bottom of the falls, the sounds are overwhelming coming from the power of the water rushing down. You can take a boat up the River to the Falls themselves and disembark at the bottom of the falls and hike up. You can also take a trip down the river which is a must for birders – an area where you most often find the elusive shoebill stork.

Game Drives (Safari drives):
Game drives are the highlight of any safari trip in Uganda and are usually very enjoyable. One can go without a Uganda Wildlife Authority Ranger, but it is more enjoyable when you do. They certainly understand the locations of animals and where they can usually be found and also know the names of the various birds found in the park. On a safari drive in Murchison Falls National Park, you can see an abundance of wildlife such as elephants, lions, leopards, antelopes, buffaloes, warthogs, giraffes and much more. Murchison Falls Park is simply a great park especially if you only have three days for a mini-safari since it gives you the ability to see maximum wildlife on a short safari.

Lake Albert Excursion:
Go downriver by boat and there you will find even more bird life and often spot the shoebill stork and lots of other birds, besides the wildlife coming to the river and later to Lake Albert. This trip takes over 5 hours and up to six hours. Those in search of birds favor this ride. 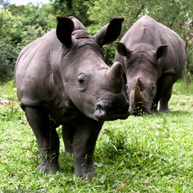 These are dark days for the rhinos all over the continent...you might want to know why?? The location of the Ziwa Rhino Sanctuary is very good, on the way from Kampala to Murchison Falls National park. You will find sanctuary on 176 km north of Kampala on the Gulu highway just before Murchison Falls. The highlight here is the rhino tracking. The sanctuary ranger meets you upon arrival and gives you an introduction to sanctuary and some information about the rhinos. It is wonderful to see these huge creatures so close when you are on your foot. It is unforgettable. There is decent lodging and food for those wanting to spend a night on thier way up or from Murchison Falls NP. Ziwa Rhino Sanctuary does great things, it's nice to know that the profits from food and accommodation are going towards the breeding programme of these amazing creatures, and the eventual release into the wild of the rhinos....Read more>>

Fishing: Fishing can be arranged with a boat, or you can fish from the river bank, many 200 pound Nile Perch has been caught here. It is best to bring your own tackle, a fishing license must be bought. You can actually fish just below the Falls either from the shore or by boat in one of the pools.Explore our fishing safaris here

Rabongo Forest Walk: This is mainly for birders and a forest walk with ranger can be arranged and it is on the other side of the Nile from Paraa Lodge. You will also see various kinds of monkeys on this walk. 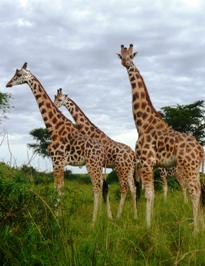 Over 450 species of Bird are found at Murchison Falls Park including: 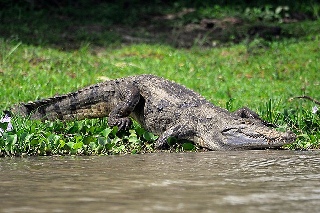 The Chimpanzees of Uganda and the best place to see chimps on safari
Uganda Weather & Climate: - year around Holiday Weather - Is just another plus to visiting Uganda
Camping & the things you need: Essential Items to Pack for Your Africa - Uganda Safari
Paying options & advice for your Safari, Gorilla tracking (trekking) or Car Rental in Uganda

Things to do and see on safari to Murchison Falls National Park
Large group travel; – this means massive reduction in prices, Do you ever save on big teams??

3 day tour to Sipi falls including a visit to Jinja town and the source of the Nile River
Things to do and see in the Pearl of Africa-Uganda.
Uganda Money Information; Forex, Credit Cards, Transfers & Travellers Cheques
Uganda Tourist Visa Information - Practical Advice where to get your visa, procedures, all in a timely manner as you arrive
Practical ways to help you save a $ on your trip to Africa - Uganda Safari

4day Bwindi gorilla tracking (trekking) tour & wildlife safari in Queen Elizabeth National Park combined - amazing Uganda Experience giving you
Whether you are looking for additional information, safari itineraries, competitive pricing, ground transportation, accommodations or any kind of help in that area, we are here for you! Feel free to either call us on +256 777 201697 or write to us today, we are always happy to answer your questions.
Top