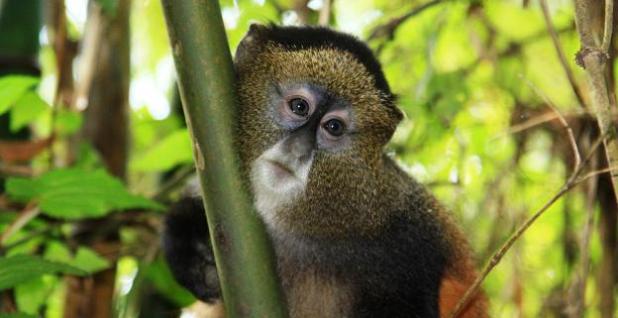 Volcanoes National Park is not just about Gorilla trekking but also home to several primate species including the elusive Golden Monkeys. And if you have time, you both the Gorilla tracking and the Golden Monkey tracking..

Like Mountain Gorillas, Golden Monkeys are also habituated Golden monkeys and will not scamper off when approached by visitors. There are two groups of about 100 members and tracking them totally different experience compared to gorilla trekking..... Golden monkeys are very golden in colour and some of them are larger than you might even expect, noisy and flit around the bamboo forest in the most playful manner. They are easier than the Gorilla's and you can enjoy watching them run about the trees. They move from tree to tree following the group leader so you can stay in one position and 20 or more will move across the same trees. 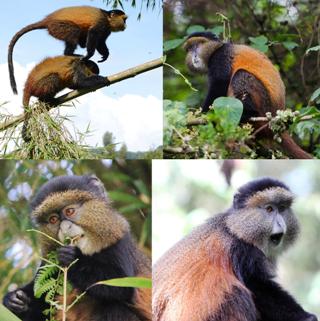 Golden monkeys live in the bamboo forests on the lower slopes, so the trek to find them is relatively easier. Again, once you find them, you’ll have just an hour in their presence.

They’re fast-moving little creatures, and very entertaining as they constantly swing through the bamboo or chase each other in circles all around you. They’re also very pretty, with shiny reddish-gold backs that blends with golden bamboo.

If you have a spare day it is worth it but it pales into insignificance compared to the Gorilla tracking which really is the experience of a lifetime and impossible to convey in words. Everything about this adventure and these treks is great. I would suggest trekking to the golden monkeys before the gorilla treks because even though the Golden Monkeys are fascinating to watch, the gorillas are an unmatched wildlife interaction that you want as your last park event if possible. To some, it feels like it’s a bit of a letdown the day after the excitement of the gorillas. Still worth doing no matter what but I also think doing the golden monkeys first works best.

Golden Monkey tracking costs $100/permit. – Wear long trousers/pants with socks that you can tuck the pant legs in to – a long sleeved shirt to protect you against the nettles. This is to keep the ants from crawling up your legs.

Tip: If you go do get a porter to carry your daypacks. Like the Gorilla tracking you get to a point where you can't take your bags beyond and the porters will stay with your bags and protect them from the rain if necessary.

If you have issues reaching us via the our business email address, here is the emergency contact; lifetimesafaris@gmail.com
By Jesse Tom Kitanywa
Top