Planning your Safari in Africa-Uganda 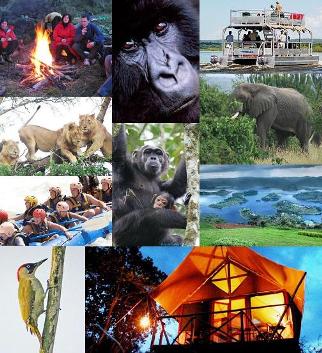 Uganda is different from other Safari locations in Africa - the reason is that Uganda is more diverse. You can find the usual African Wildlife, but then there is more - The tallestt Mountain Range in Africa, Volcanoes, an abundance of Lakes including the 2nd largest in the world and one of the deepest and most scenic in Africa - Lake Bunyonyi. There are the Rainforests, the only jungle in East Africa, the mountain gorillas, the chimpanzees, and golden monkeys and even more such as the best White Water Rafting in the World. Coming to this condensed version of Africa within one country - Uganda - takes planning, so that you take in and do what you would like.

What would you like to do on a Safari in the Pearl of Africa - Uganda?

Save with Lifetime Experience Safaris on Gorilla Tracking:


Practical ways to help you save a $ on your trip to Africa - Uganda Safari
Gorilla Tracking (trekking) information safaris, Practical advice and tips

The Chimpanzees of Uganda and the best place to see chimps on safari
Uganda Mini-Safaris: Short trips/tours you might consider (1, 2, 3 & 4 day safaris)
Long Uganda safaris: 5 days or more into top safari destinations
Travel Information and Guide For those Planning to visit the Pearl of Africa - Uganda

Trek Uganda-Bwindi Mountain Gorillas coming from the south (Rwanda) without coming to Kampala and return to Rwanda Kigali
Things to do and see in the Pearl of Africa-Uganda.
Packing List for your Safari in Uganda - The Essentials Things to pack for gorilla tracking.
Africa (Uganda) Practical Travel Guide & Health Information: All health travel concerns addressed, before during & back home
Uganda Car Rental Information and Advice

Uganda Tourist Visa Information - Practical Advice where to get your visa, procedures, all in a timely manner as you arrive
Planning your Africa-Uganda: The things you want to do and see determine the kind of Safari you want to go on