Best Times of the Year to track Mountain Gorillas would be the dry seasons
Uganda has the gift of Holiday weather year around. There are two reasons, one is its location on the equator and the other one its elevation. Both of these together give Uganda the gift of near perfect weather and for those coming here on holiday on a Wildlife Safari or simply a cultural visit to Uganda receive the added gift of the weather. Even during the two rainy seasons, do not let the words fool you, the sun is out most of the time and rain often occurs at night and during the early morning hours along with a most delightful thunderstorm and when it rains, it pours but soon the sun's rays have dried up the earth once again. You may also check out this link for climatic tables from selected towns in Uganda.

Sunrise and Sunset:
It varies by a few minutes throughout the year. Dawn and sunrise will come at around 6:30 am in the morning. If you are near a mosque, the first call to prayer will be at 5 in the morning alone with the roosters. Sunset is at 7 pm or shortly thereafter, giving 12 1/2 hours of daylight each day.

Rainy Seasons of the Year in Uganda:
There are two a year, called short and long rains. However if you are in western Uganda or around Lake Victoria it can rain almost any time, but again, rain here is usually of short duration, heavy at times, but soon it is over, unlike where I have lived in the Northwest of the USA where it can rain steadily for a week at a time.

Short Rains: March to May of the year accompanied by fantastic thunderstorms. 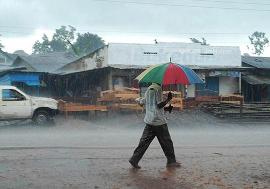 Long Rains: September to November and once again often there is a thunderstorm with it. Usually it is during the night or early morning, by 10 am the sun is out.
There are some dry regions of the country that receive a very small amount of rainfall of 100 mm or less however in the rest of the country it is between 1000 and 2000 mm.

Best Time of the Year to Visit Uganda:
The best time, the best months of the year would be December to late February and from June to September. This includes the best times to do gorilla tracking since there is a lot of hiking involved at times.

Personal Observation: One needs to be realistic-when one says rainy season - let us define it a bit more. If you're coming from the Pacific Northwest, where rain can be all day long for weeks at a time. Here the rains usually come and go and the sun comes out. It can rain for about 30 minutes, an hour and stops and mostly during day time. I personally enjoy the crackling thunder, the pouring down rain and then the sun comes out and dries up the ground once again.

Kampala - Elevation 1,155 meters: The high temperature will vary by 3°c over the year, the mean daily high being 27°c. The low varies between 16 and 18°c throughout the year. 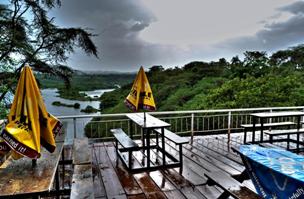 Entebbe - Elevation 1,145 meters: The high temperature will vary by 2°c over the year, the mean daily high being 26°c. The low varies between 16 and 18°c throughout the year. Entebbe is cooler and the British made it the capital of Uganda since it was more comfortable to live along Lake Victoria with its breeze and somewhat cooler climate and less humid might one add.

Fort Portal - Elevation 1,540 meters:The high temperature will vary by 2°c over the year, the mean daily high being 25°c. The low varies between 12 and 14°c throughout the year. This is the western region of the country and as you can see considerably higher in elevation than Kampala

Kabale - Elevation 1,950 meters: The high temperature will vary by 2°c over the year, the mean daily high being 23°c. The low varies between 9 and 11°c throughout the year. Again you are dealing with a higher in elevation location in western Uganda that is cooler so that even apples can be grown.

Gulu - Elevation 1,110 meters: The high temperature will vary by 5°c over the year, the mean daily high being 29°c. The low varies between 16 and 18°c throughout the year.

Masindi - Elevation 1,145 meters: The high temperature will vary by 3°c over the year, the mean daily high being 28°c. The low varies between 12 and 13°c throughout the year.

Jinja - Elevation 1,145 meters: The high temperature will vary by 3°c over the year, the mean daily high being 28°c. The low varies between 14 and 15°c throughout the year.

As you can see that for the most part the temperature are rather pleasant and holiday like weather in Uganda, though the equator runs through it, because of its elevation the temperatures are enjoyable. You can relax alongside one of the pools of a lodge or tented camp and simply relax in the sun on one of the beaches of Lake Victoria, do use sunscreen to protect your skin and re-apply regularly. If you are taking doxycycline as a malaria regiment, your skin and scalp might become much more sensitive to the sun. 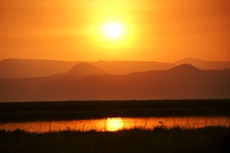 Temperature range for Kampala and major town of Uganda

Gorilla Tracking (trekking) information, safaris, Practical advice and tips
Uganda Tourist Visa Information - Practical Advice where to get your visa, procedures, all in a timely manner as you arrive
Practical ways to help you save a $ on your trip to Africa - Uganda Safari
When is the best time to visit Uganda for Mountain Gorilla Tracking (Trekking) Safari?
Gorilla Tracking Add-on Options: Other things you can add to your gorilla tracking experience during your visit to the Pearl of Africa-Uganda
Camping & the things you need: Essential Items to Pack for Your Africa - Uganda Safari
Trek Uganda-Bwindi Mountain Gorillas coming from the south (Rwanda) without coming to Kampala and return to Rwanda Kigali
12 habituated Mountain Gorilla Group Families found in Bwindi Park - Uganda for you to choose one to visit
Bwindi Gorilla Park Information: Bwindi is home of over 400 of the worlds critically endangered estimate of 880 mountain gorilla population.
Mgahinga Gorilla National Park Information:This park has gorillas at times. There are also the Golden Monkeys
Packing for your Safari in Uganda - The Essentials, Things to pack for gorilla tracking.
Bwindi Impenetrable Forest Park Lodging & Accommodations:- from budget to up-market lodges Best places to stay at,
Safari Clothing for Uganda, What to wear on Safari:- Out in the African bush, you have to leave many of the comforts of home behind
3 day Mountain Gorilla tracking (trekking) Mini-Safari - Bwindi Impenetrable Forest
4 Day Bwindi Gorilla tracking (trekking) tour combined with Queen Elizabeth Park Wildlife Safari - amazing Uganda experience!
5 day Kibale Chimpanzee along with Bwindi Mountain Gorilla Tracking (Trekking) Uganda Safari
Take a break after Gorilla Tracking (Trekking), spend a day or two at a Lake that is a scene out of "Lord of the Rings"- Lake Bunyonyi! Choose a 5 day gorilla safari!
Other Longer Uganda safaris with Gorilla Tracking (Trekking): 5 days or more into top safari destinations
Uganda Mini - Safaris: Other short trips/tours you might consider (1, 2, 3 & 4 day safaris)

Save with Lifetime Experience Safaris on Gorilla Tracking:
Paying options & advice for your Safari, Gorilla tracking (trekking) or Car Rental in Uganda
Uganda Car Rental Information and Advice
Current Car hire / rental discount price list for Uganda
Travel Information and Guide For those Planning to visit the Pearl of Africa - Uganda
Our Birding Safaris: Uganda is a Birders Paradise
The Chimpanzees of Uganda and the best place to see chimps on safari
Tented Camp Safaris:There is nothing like it. Taste of Africa.
Luxury Safaris in Uganda: Why go on an up-market Safari in Uganda?
Budget - Moderate - Luxury Safaris - What is the difference?
Tented Camp Accommodations: In the classical African Safari Tradition.
Kampala City Information:Hotels, Restaurants, Nightlife, and so much more
Large group travel; – this means massive reduction in prices, Do you ever save on big teams??
Africa (Uganda) Practical Travel Guide & Health Information: All health travel concerns addressed, before during & back home
Uganda Money Information; Forex, Credit Cards, Transfers & Travellers Cheques
Planning your Africa-Uganda: The things you want to do and see determine the kind of Safari you want to go on